When researchers distill the personal qualities that underpin positive outcomes in life, two traits come up consistently. The first is intelligence, the other is willpower. Unfortunately, increasing intelligence has proven to be difficult at best. Conversely, recent research indicates that willpower is something that we can increase and improve. In fact, much like a muscle, willpower can be fatigued from overuse and strengthened with consistent exercise. 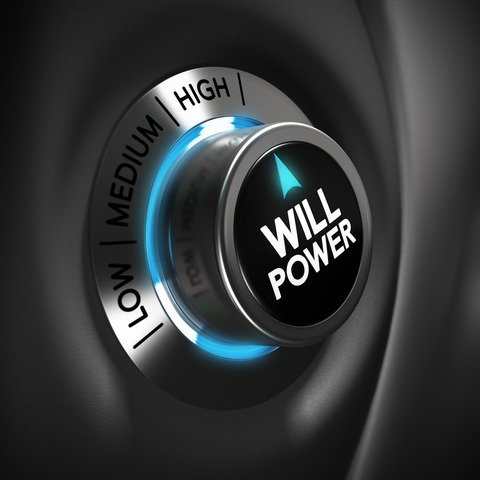 The concept of “willpower” was brought to the attention of social psychology researchers through the pioneering work of Walter Mischel, who studied the ability of preschool aged children to delay gratification. These experiments in the 1960’s, coined the “Marshmallow Tests,” are among the most widely known in the annals of psychology. The results of Mischel’s studies are remarkable: the four year olds who were most able to delay the gratification of eating one marshmallow in the short-term in order to receive two marshmallows after fifteen minutes went on later in life to get better grades and higher SAT scores, were less prone to weight gain, had lower levels of drug abuse, and earned higher salaries than those who succumbed to temptation. This line of inquiry went on to spawn more experiments and studies, which added depth to and corroborated Mischel’s findings. In fact, later research found willpower to be a better predictor of college grades than a student’s IQ or SAT scores. Moreover, in 2010 an international team of researchers published evidence that is perhaps the strongest yet in highlighting the correlation between willpower in children and positive outcomes later in life. One thousand children in New Zealand were tracked from birth to age thirty-two. The children with the highest levels of self-control (i.e., willpower) became physically healthier (as measured by obesity rates, diabetes, sexually transmitted disease, and dental care) and more financially stable (as measured by income to debt ratio) adults than their peers with lower levels of self-control. Among those with the lowest levels of self-control, more than 40% had criminal records by the age of thirty-two. Some of the differences observed in the study were correlated with intelligence and social class, but even when these factors were taken into account, the results remained significant. These results led the researchers to declare: “Self-regulation failure is the major social pathology of our time.” Another interesting conclusion that came out of the latest research on willpower, as well.

Quite relevant to the work that we do with our clients, students, etc., is the discovery that willpower is finite. That is, it can be depleted through a number of processes, a couple of which are decision fatigue and stress. Decision fatigue is a process that those in the sales and retail world have known about for years; hence, the candy bars and tabloid magazines at the check out stands of supermarkets. The idea is that after making a myriad of decisions throughout the shopping experience, the shopper is less equipped (i.e., more fatigued) to resist the temptation to make an impulse purchase. The finite pool of willpower has been depleted in the process of repeatedly deciding what to purchase and what not to purchase in the supermarket. This is decision fatigue, and it applies across contexts. The more willpower exerted in the making of any decision, the less available when the next temptation comes along. The good news is that as willpower can be depleted, so too can it be replenished and even strengthened.

These findings beg the question: “How does this research apply to the work that I do with my clients?” There are some concrete strategies that we can implement in our work with our clients that can help bolster their willpower. We can begin by helping clients play offense instead of defense. This means that we can help them design lives in which they are not in perpetual states of crisis control (which is how many of our clients live before coming to us). Those with high levels of willpower use it more to develop effective habits and routines rather than get through crises. One of the more important services that we can provide our clients is the ability to step out of a life of crisis and begin to build healthy habits. With this concept as foundational, we can look at some specific strategies that have been shown to be effective. One that has shown to be quite useful is the “Nothing Alternative.” This is a situation in which a decided on amount of time will be spent on one task and nothing else. For example, clients who want to be productive writers, let’s say, might commit to sit down to write for four hours per day. During this allotted time, it’s important that they do nothing else; that is, no checking cell phones, no checking email, no surfing the Internet, etc. If not actively writing, they should be doing nothing else. Under this self-imposed rule, it’s remarkable how productivity increases in the chosen domain or activity. It’s a simple tool to fight procrastination. Although much of what is important to our clients may not be as solitary and clearly defined as this, the point is that the value lies in setting aside time to do one and only one task. We might help our clients start their day by focusing sixty or ninety minutes on their most important goal for the day, with no interruptions of any sort during that time.

This “Nothing Alternative” has at it’s core another helpful strategy: the “if x-then-y” rule. These have been shown to decrease the demands on willpower. Using the example above, the “if x-then-y” rule appears as: “If I can’t write, then I will do nothing.” For clients who have struggles with substance abuse, an example of an “if x-then-y” strategy might be, “If I go to the party, and there are drugs there, I will call my sponsor to come pick me up.” Every time this rule is followed, the more routine and habitual it becomes. And habit is extremely effective in conserving willpower. Perhaps the most powerful tool in playing offense instead of defense in fostering willpower is the concept of precommitment. Here the client is precommitted to a behavioral rule before encountering a potentially difficult situation. This is the recognition that temptations will be faced and making it hard to stray from a value-driven path. For someone wanting to lose weight this would look like not having junk food in the house, or for an alcoholic trying to stay sober, not going into bars. Exposure to the difficult stimuli is taken out of the realm of possibility (or at least made much more difficult to experience). Keeping track of progress is another important piece in strengthening willpower. The more carefully we help our clients keep track, the less likely they’ll fall prey to procrastination. To use the writing example from above, this would be keeping track of words written per day. For someone trying to lose (or gain) weight, taking and recording weight daily is useful. Not only does this monitoring provide immediate feedback, but it also helps improve long-term planning. This done within the context of a supportive community can be very effective.

We’re helping clients practice breaking harmful and unhealthy habitual behavior while replacing it with healthy behavior, healthy habits. Establishing habits helps improve willpower by triggering automatic mental processes. This is a way of producing more results with less effort. The more automatic our behavior becomes, the less willpower will have to be exerted on a moment-to-moment basis, and the less depleted clients will be when particularly difficult circumstances are encountered.
While many of us implicitly incorporate many of these will power-cultivating elements already in our treatment milieus, it does behoove us to approach willpower explicitly. Knowing now that it is so strongly correlated with well-being across domains, it is incumbent upon us to work with clients to bolster their willpower. Understanding how to strengthen this capacity for willpower can enable us to afford our clients an experience that can be tremendously empowering. Precommitment, “if x-then-y”, the “Nothing Alternative”—try incorporating these willpower-fostering tools into your work with your clients, students, and kids. I think you’ll find that mindfully designing willpower practices for our clients, students, and kids can be particularly transformative.