I was recently talking to a friend of mine, Rachel, who works in the field of higher education at the University of Utah, and I mentioned a presentation that I was beginning to prepare for on the role that technology plays in the mental health of young adults. My co-presenter (Tim Mullins with Evoke Therapy) and I had come up with some ideas that we wanted to explore and flesh out, and I was talking to Rachel about these still unhatched ideas. She was very excited to hear of the topic we were presenting about, and she told me of a book that she had recently read called iGen by Jean M Twenge. Let me clarify: Not only did she tell me about it, but she also said I HAD to read it. So read it I did. 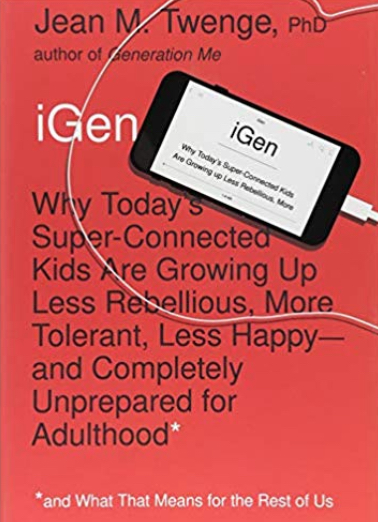 Before I dive into the book, I think providing the full title will be helpful in giving some insight into Twenge’s theses: iGen: Why Today’s Super-Connected Kids Are Growing Up Less Rebellious, More Tolerant, Less Happy—and Completely Unprepared for Adulthood. As we (Tim and I) are concerned with exploring the mental health effects of social media use on young adults, this book turned out to be just as pertinent and germane to our line of inquiry as you might think given the title. Although only one of many sources that will inform our presentation, this book, and the research cited therein, greatly influenced my perspective on the subject and confirmed what to that point had been intuition and anecdotal thoughts and feeling about the topic. And while my initial plan for the presentation was going to be to approach the subject quite neutrally and open-ended in conclusion, after reading this book I feel much more emboldened to offer a quite pointed assessment of the role that technology plays in the mental health of young adults.

Let’s begin by explaining how Twenge defines iGen. The iGen (a term first coined by Twenge in 2006) was born between 1995 (first year of the internet) and 2012 and is comprised of about 74 million people or about 24% of the American population. One of the defining features of the iGen is that it is the generation in which the smartphone ascended to a place of social pre-eminence and quickly assumed importance heretofore unseen historically (especially since about 2011). This was unlike any other form of media at this point. In fact, the average iGen high school senior spends about 5 hours a day on what Twenge calls “new media”—texting, internet, gaming. With teens spending about 17 hours a day on school, homework and school activities, and sleep, this means that nearly all of their leisure time is spent on new media (they spend an average of 1.5 hours per day on TV as well, but much of that time spent multitasking). Interestingly, this varies little along socio-economic strata—disadvantaged teens tend to spend the same amount of time online as their more advantaged peers. How about social media use specifically? In 2015, 87% of 12th-grade girls and 77% of 12th-grade boys (in the United States) used social media sites daily, and 97% of 12th graders used social media sometimes. As Twenge concluded, it’s “about as universal an experience as you can get.”

Having provided some context, I’d like to look at Twenge’s assessment of the effect that this technology has had on the mental health of the iGen. When the first iGeners became high school seniors in 2012 and 2013, life satisfaction as assessed through questions about whether they were satisfied with themselves and their lives as a whole began to plummet, as compared to the generation of Millennials immediately preceding the iGen. The iGen’s experience of loneliness seems to be pervasive and growing. In fact, there is a specific term that the iGen has coined that supports this burgeoning loneliness: FOMO (fear of missing out). While smartphone use has increased (especially since 2011), loneliness has increased. In fact, 31% more 8th and 10th graders felt lonely in 2015 compared to 2011, and 22% more 12th graders felt lonely over that same time span. Given the timing in popularity and a spike in the rise of smartphone use in 2011 Twenge concludes that there is little else other than smartphone use that could explain the increase in loneliness—the general hypothesis being that “as smartphones became more popular, screen time increased, and thus teen’s loneliness increased.” Concurrent with the spike in loneliness has been a spike in overall depressive symptoms in high school and college-aged kids and young adults. According to the American Freshman Survey of entering college students, all indicators of mental health issues reached an all-time high in 2016, with self-reports of “feeling depressed” increasing 95% since 2009. “The sudden, sharp rise in depressive symptoms occurred at almost exactly the same time that smartphones became ubiquitous and in-person contact plummeted,” says Twenge. Twenge speaks of the paradox of the iGen: “an optimism and self-confidence online that covers a deep vulnerability, even depression, in real life.” Twenge goes on to assess if/how the increase in feelings of loneliness, depression, and anxiety have been accompanied by an increase in suicide. Declining in the 1990s and stabilizing in the 2000s, teenage suicide rates have increased at an alarming rate in the last ten years: “Forty-six percent more 15 to 19-year-olds died by suicide in 2015 than in 2007, and two and a half times more 12 to 14-year-olds killed themselves.”

While other social theorists have posited factors such as academic pressure, TV watching, and a decrease in time spent on exercise and sports as possible causes of the increase in mental health issues, Twenge carefully points out that data indicates that it is indeed “new-media” (i.e., electronic devices and social media) screen time that lies at the heart of the rise in mental health issues seen in the iGen. Implicated in the recent precipitous rise in mental health issues is the decrease in face-to-face communication and print media use, both of which are linked to mental health issues. Another recognized contributing factor is the decrease in sleep that iGeners are getting. “Fifty-seven percent more teens were sleep deprived in 2015 than in 1991, and “In just the three years between 2012 and 2015, 22% more teens failed to get seven hours of sleep.” Twenge asserts that smartphone use “appears to be the primary cause of the recent increase in sleep deprivation….” Through her thorough and meticulous analysis of recent data, Twenge goes where many social sciences fear to go—she draws a causal (rather than correlational) relationship between smartphone use and mental health issues.

After a convincing analysis of the issue, the question of “How do we address this?” is begged. Twenge says, quite simplistically, …”put down the phone and do something else.” Sounds good and makes sense, but I think we, as a society, are faced with the very important task of addressing this in a more comprehensive way. There seems to be an almost inexorable social drive toward more smartphone use, not less. Given the strength of this social drive, is it realistic to expect iGeners, and those generations to come, to limit their use of the smartphone technology? Is there a way to find solutions to these problems that is both realistic and effective? A question that Twenge poses is “How can we protect our kids from anxiety, depression, and loneliness in our digital age?” There are a few ways that Twenge identifies with which we can begin to address this issue. One suggestion is to hold off as long as possible in getting our kids cell phones, especially smartphones. Another is to limit the time that our kids spend on social media. Twenge asserts that an hour or so of social media use may have few-to-no ill effects. She also states that face-to-face contact is a protective factor against mental health issues, and from that perspective, she suggests that we be careful that we’re not over-managing face-to-face contact out of our kids’ lives.

Tim Mullins and I will explore this topic at next month’s Young Adult Transition Association (YATA) conference. We will explore the topic and invite a discussion that will, hopefully, help further how we think of and address this issue that appears to be growing in acuity month-by-month. One of the things that I appreciate most is that Twenge does not appear to have an agenda or bias of her own. Instead, she seems to be quite data-driven in her analysis. In fact, she does recognize areas that smartphone technology seems to be of social benefit. While I focused quite specifically on smartphone use and mental health in this blog post, I’d recommend it to anyone interested in exploring the effect that smartphone technology is having on the iGen.