Admission, The Price Of

“Possibly the greatest crime we commit against each other is this daily show of normality… The comment ‘Don’t mind him, he’s got a problem’ illustrates this universal attitude toward personal difficulty. The implication is that having a problem is a strange and avoidable weakness. When I come in repeated contact with this daily facade of normality I begin to assume that I too deserve such a life, and I get annoyed with the present and look upon my difficulties as unjust. And because I assume there is something unnatural about my having a problem, I too attempt to present a problem-free appearance.”
-Hugh Prather, Notes to Myself

Years ago I was diagnosed with depression. I’ve since graduated from college, volunteered with the Peace Corps, and worked for this therapeutic program, which is to say that my time in depression seems long ago. Maybe it is. And this work often brings some of those memories to the surface. The thought I know what that’s like will pass through my mind, though I don’t, and can’t. Mostly those thoughts aren’t appropriate to share, not when my primary responsibility is to listen and hear a client. My stuff may be a distraction. And I want to tell you about tonight, the last night of nearly my last shift, when all my experience suggested it wasn’t and wouldn’t.

In the mid-afternoon, one of the group’s members had kicked over a pot of water, denting it, in a burst of anger following my refusal to help him carry it to where he would use it to bathe. When he responded with verbal aggression, we opened an opportunity for him to formally check in, then mandated he take time away from the group after he declined. We moved the group’s meal preparations elsewhere when he refused. We as a staff team were unwilling to permit this aggressive communication in the group, and held a boundary with what flexibility and compassion we could express, without judgment.

Meanwhile, the day marched on. Late-afternoon transitioned into a golden hour, with an early-spring sunset, full of oranges and reds in clear sky crisscrossed with airplane contrails. I took personal time to recover my emotional resources after taking lead in de-escalation, another staff member processed 1:1 with the client in crisis, and the rest of the team prepared dinner with the group, making strategic use of our fire pan. 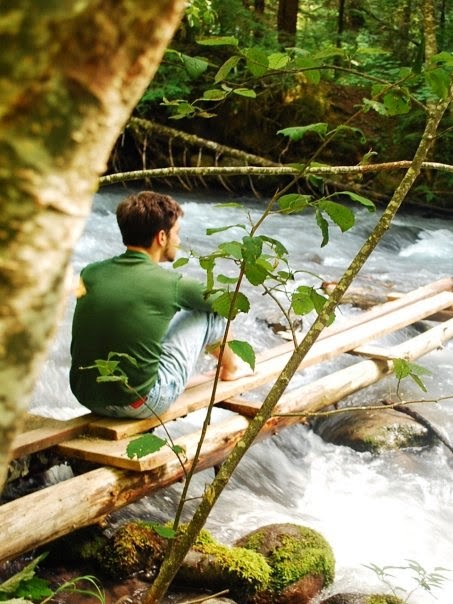 Maybe a half-hour later I returned recharged, and joined the group. Soon after we were joined by the client who had been working 1:1 with another staff member. He called a group, gave multiple check-ins, practiced assertive communication by giving me direct feedback, then opened his group for open discussion. In the course of it, he expressed that he was depressed. My victim-stance radar was blaring: he claimed depression as the cause of unhealthy behaviors rather a label for them. He didn’t think he had a choice, had control. He said he believed the problem(s) of his depression were unsolvable, merely diminishable to manageability. I disagreed. And something deeper came up in me, a response from a place of past hurt and present hope.

I have something I’d like to share, I said, because I think it may be useful to you. And it’s vulnerable, I said. Please respect that. My junior year of college I was diagnosed with Major Depressive Disorder, experienced a similar ‘Negative Mindset,’ to use the day’s vocabulary. I didn’t say I struggled to get out of bed, just like you did this morning, when I stayed with you near your shelter, singing to myself so you knew I was there. But I could have. I knew the weight of seemingly insurmountable problems just as you do, wasn’t sure I’d ever be rid of them, as you are. I’d felt helpless. No longer. Depression is not my identity, I said. From where I stand, it never was. Yeah, he said, but you still have problems and his response opened my mind to a graceful response.

I do. I said so. I said I’m overjoyed to have them. My problems today are not the same ones I had when I was experiencing depression. I’m overjoyed because so many of the problems I have are beautiful problems: how to build a new community as I leave for graduate school (and how to stay connected with those I belong to already), how to develop my own teaching style as a future teacher. The path is not a straight one leading to a world without problems, but rather one that branches, sometimes toward debilitating, disempowering problems, like addiction, sometimes toward awe-inspiring challenges that demand we rise to the occasion: raising a child, starting a new career, traveling into the unknown. I didn’t quite say all this, and it’s close enough.

And yet--writing now, what I did say seems incomplete. I’d thought to end this post by expressing my hope that you, too, might wend your way onto a beautiful branch with beautiful problems, but what’s called for is a way of seeing, not a direction of travel. This sight, this awareness, is what enables us to choose the life-affirming fork. I can see my depression, disabling and disconnecting as it was, as inseparable from my search for my connected self. It was a part of the grand questions, “Who am I?” and “How should I live my life?” and if finding the answers to those questions isn’t a beautiful problem, I don’t know what is.

I wrote the core of this post in my sleeping bag the same night as the events I describe, though I’m returning to it now, months later, to complete it. While it’s impossible for me to say whether the conversation had any lasting impact for any of the group members, reading my words from six months ago, I know it has for me. “What’s called for is a way of seeing, not a direction of travel.” This is part of my truth.

I was acting under a set of principles that fostered caution around sharing vulnerability, and I felt empowered to use my judgment to share a part of my history because I’d done the work to heal. I didn’t share from impulse, though it was a spontaneous decision. It fit my vision of my role as a caregiver. You couldn’t write a manual on when and how much to share. It’s the part of the job that requires judgment and experience and discretion. I’m grateful that Evoke cultivates this judgment, and builds a trustful process for us to exercise it.
My intention, enabled by this therapeutic way of seeing, was to invite the group member into a new way of seeing himself, one where we can choose, with our actions, many of the problems set before us. I offered my personal experience as a gift. I offer this post to you in the same spirit. I wish you, too, the joy of a beautiful problem.