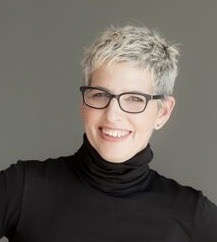 Recently, a friend who has a teenager texted me: “I am a rabid fan of Brad Reedy’s Evoke Therapy podcasts. I have recommended these to so many people but I’ve never heard back from anyone to know what they think.”

And, me? I had a definite opinion on this! I got hooked on his webinars when our child was walking around in circles on a mountain in Utah in December seven years ago. Since then, I’ve read both of his books and even seen him speak live at an event in my area. I feel like I know Brad well.

I am a firm believer in gratitude, and I am so grateful for the opportunity afforded my family on our heroic journey. For years I listened to Brad's first book The Journey of the Heroic Parent in an endless loop. It never gets old. Why? Well, let’s see, I still have kids (even if they are grown and flown) and really, because it’s a good book on relationships, and I still have those too!

So, my journey as a parent. Heroic? Yes. And humbling. According to the dictionary on my phone, a hero is “a person noted for courageous acts.” And, in truth, my truth, there are few more courageous acts than being willing to hire two men to take your beloved child out of the “safety” of their room and then escort that child on a plane to Utah. I am forever grateful to those two angels, Gabe and Andre, but it was an act of courage, an act of the heart. And the base of courage? Coeur, which means “heart” in French. Cor in Latin.

It was the most loving thing that we as parents could do. It was also the single worst day of my life. I wailed for a solid 48 hours. My hope for myself is that I will be able to live a fulfilled life, and that that day will remain the worst. What I know from this part of my life is this: I have no idea what will happen in the future. I most assuredly never thought that I would ever in a million years end up spending a small fortune (Oh, the trips I could have taken, the shoes I could have had!) sending my child away in the way that we did. A mere three years earlier I didn’t even know that it was possible, that there were “transport” companies who could be hired to take your beloved child from your home and get them safely to a program. And, then I learned.

The truth? That took a courage that I did not know that I had. But, love is a strange thing, and our child deserved every ounce of courage we could muster, and more. Summoning that courage was the best thing that I ever did. Was it easy? No. Did it happen overnight? No. Did it make everything better? It changed things, and they did improve. What it did give me was my own sanity back for sure. What it did give me was a reminder of what reality looked like, and the ability to live in the real world. Where was I living before?! Yeah, not reality exactly.

The work that I did “because of”/for my child? I am still doing it, but I realize that I am not doing it for them; I am doing it for me. I thank goodness for the whole experience. If I had not been doing the work, I would have been as devastated as our previously successful small business was by the pandemic. I may have been a bit exhausted at times, but we are okay. My wife likes to say that my hair, which used to catch fire daily, rarely even sizzles anymore. That is thanks to the journey, thanks to the brave and marvelous folks who we met along the way, and to both of our amazing, beloved kids.

And those kids? We’re all still learning--imperfectly, but honestly. We have loving, trusting relationships with both of them. They call, they come over, we get to watch their cat when they leave town to go camping--although only one of them could start a fire with sticks if it came to that. Are they living the lives that we imagined they would? Heck no! They are living their lives! They are independent and doing their own navigation, building their own lives their way. As the younger one said the other day, “Time don’t stop, the work don’t stop.” (Not proper English. He speaks for himself, not me. And, he’s right!)

What I gained through this whole experience was how to be trustworthy. And the craziest thing? When that happened? People, including my beloved children, trusted me back.

Thank you Sarah, for your morel of courage and vulnerability. Happy to share the journey with you and your family.

Wow Sarah.... Thanks for your post. I too had "transport" take my daughter to Evoke. Your story gave me chills as it was so similar to my experience. Brad Reedy's books and podcasts were transformative for me. I truly believe that I am a better person now than I was before my daughter went to wilderness. I have learned about her, myself and people in general. I am so grateful to continue this amazing journey with 2 incredible "kids" who I see for everything they are and I adore it all.