The Best Gift Wrapped in the Ugliest Paper 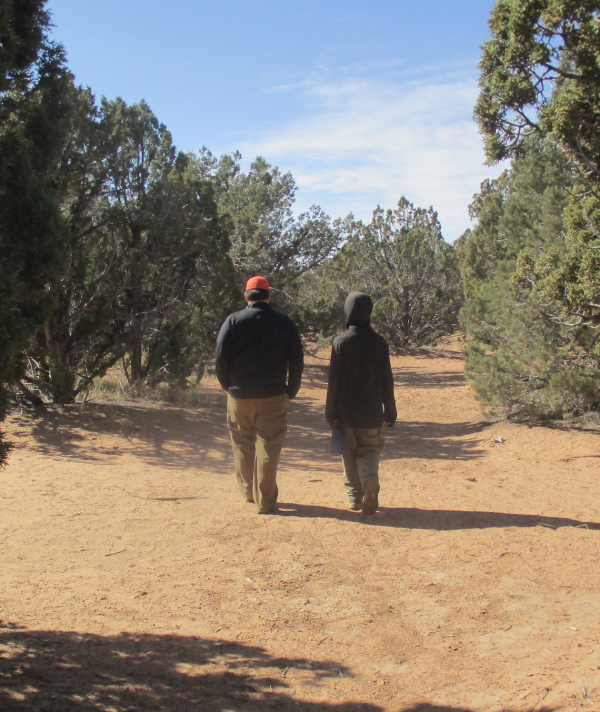 Our son was being transported to the wilderness in Utah, a six-hour drive from home. It was one of the longest nights of my life.

Jesi called to let me know when he arrived at the Evoke Entrada office the next morning. Around lunch time he asked her to send us a picture of him eating a spicy chicken sandwich from Popeye’s, something he had never eaten but had always wanted to try. Here began the first of many new experiences for our boy and family.

Our son began his time in wilderness in mid-November, barely 15 years old. The weather was getting colder by the day as winter announced her presence. The immense guilt in my heart was almost eating me whole. I would not turn on the heater because my son was sleeping without heat. I only allowed myself to take short showers because he was taking billy baths out there. These self-imposed punishing acts lasted for two weeks.

Part of me was so relieved to have him at Evoke, while the other part of me was filled with anxiety, shame, and guilt. My mind was constantly worried about his physical safety in this new environment. Our family had had very few camping experiences and even those were done in the comfort of an RV or cabin.

Those early days tormented my soul. Tears would come in unexpected moments throughout my days and sometimes there did not seem to be enough oxygen in the air to breathe.

I immersed myself in the parent component of the program to seek refuge. I became a student again and followed what was suggested by Matt, our therapist. I listened intently to the webinars by Brad. I read the recommended books. I wrote the letters as assigned. And most importantly, I began my own healing journey with my own therapist.

The weekly letters from my son, solo and site pictures, group journals, and therapist calls kept me grounded and painted a picture of the life my son was living away from me. He wrote about his ritual of waking early to watch the sunrise each morning. It was during these moments that he wrote letters to us. He wrote about how he was becoming the group’s master chef, mixing certain spices in the right combinations to create tasty meals. He wrote about the prized cheesy torts that he earned.

And from our calls with his therapist, we heard about the torrent of tears he shed throughout the individual sessions of his early days. These were tears that had been buried and couldn’t be expressed when he was living at home. We learned more about the emotional wounds he sustained over years of being bullied.

As my son moved through the phases of his healing, I also moved through my own journey. We both found acceptance in our separate, yet collective healing work. The tears of desperation transformed to tears of hope, and there were even moments of joy. We learned to celebrate the milestones of life in the wilderness from afar. All of the “firsts” (busting, phase promotions, long hikes in the rain, a snow fall, etc.) were so powerful in helping my son shift from self-destruction to empowerment. He was beginning to live without his masks and embracing his vulnerabilities.

During our field visits, his father and I witnessed the brotherhood our son had formed with five other boys in his group. In a short time, these six boys were able to support and become containers for each other’s pain while encouraging one another to take the next steps forward.

We witnessed the dedication and precision of the field staff as they cared for and worked with the boys. With emotional safety nets woven from respect and healthy boundaries, staff caught each misstep. They witnessed the breakthroughs and regressions while supporting every big and small victory the boys achieved individually and as a team. Upon nightfall, the group snuggled in their wigs (sleeping bags) underneath a blanket of stars shining above and listened intently to bedtime stories.

There was nothing comfortable about sleeping under the open sky for me. The novelty wore off in a matter of minutes. I was miserably cold and the howling wind mixed with my husband’s snoring kept me awake for most of the night. Yet, there was still magic: Our firstborn sleeping in between me and his father. Mother and son chatting and whispering our memories and new learnings late into the night until he quietly drifted off to sleep.

He woke refreshed to the rising sun just as he described in his letters. He laughed at my sad state as he helped me up and packed my gear for me. He got us situated in a spot where the sun was shining to keep me warm and proceeded to make breakfast for the three of us, just like he did the night before with dinner.

When it was time to leave, my husband and I knew wholeheartedly that our son was in the right place. There was something profoundly healing about being in the Utah desert with its red sand, open sky, and vast lands, stretching in all directions.

That morning we understood that Mother Nature in all of her majesty and unpredictability + a gifted therapist + dedicated field staff + a program crafted from experience and rooted in research would bring forth a return to a life filled with hope and light for our family. Those elements would bless us with a son who was learning to speak his truth and love his Self; and they would bless our son with parents who were learning how to listen deeply to understand.

Fast forward to the last day, our finale. We returned to the field to pick up our son after 13 weeks. The tender good-byes were heartfelt and genuine, filled with compassion and human kindness.

Evoke was a place of rebirth for our family, touching each of us uniquely, yet cohesively binding us as a clan.

Thanks for sharing this Annie!